Welcome to our Band Buttons category! This is Page 2 of 2 of Band Buttons related content. Below you will find articles, posts, coupons or samples featuring Band Buttons. To see our latest posts, visit Blog Home.

We just completed an order of custom 1” round buttons for Eddie Vedder. For those of you who may not know who Eddie Vedder is, he is the lead singer of Pearl Jam and has recently started his own solo career. He recently released his second solo album, Ukulele Songs, and is slated to begin his summer tour on June 15th.

These custom buttons are awesome looking and should serve as a great promotional product for his upcoming tour. Check out his website here for more info on his new album and upcoming tour!

Paramore has been getting more and more popular lately. We’ve been there to keep supplying them with all their new custom buttons, button packs & even custom stickers. Below you’ll see some of the recent work we’ve been doing for them. Here is just a quick photo of the most recent 6 x 1″ Round Custom Button Pack job we’ve done for them.

Be sure to listen to Paramore on iTunes. 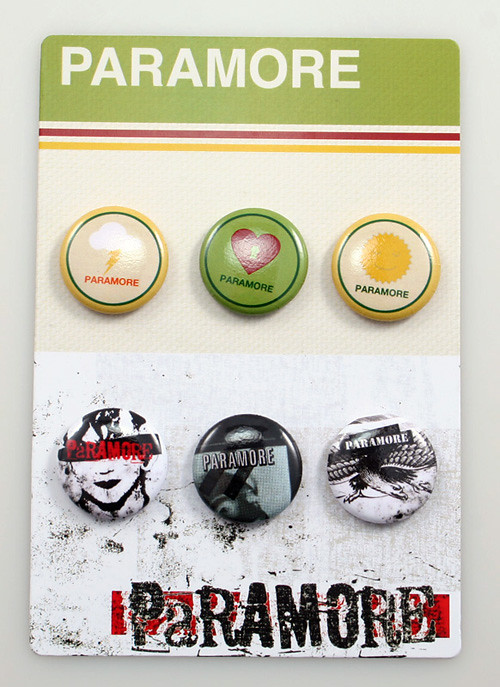 If you are in need of custom buttons, custom stickers or button packs for your own band, record label, or company, please give us a shot! We’ll make you look great with high quality custom merch!

The state of the economy, buttons are more popular

When the economy is having difficulties, many things change. Some recent examples of businesses changing to stay competitive is Ford, announcing that they will produce less trucks and SUVs to manufacture more small cars. In marketing and advertising, for example, you see PPC campaigns taking a hit. Google and Yahoo both failed to meet investor expectations and their stocks went down. Buttons, however, have grown exponentially during this state of the economy. As a company, we have noticed a lot of companies, big and small, placing more and larger orders for buttons. Interestingly enough, we have seen a dramatic growth in inquiries from marketing and merchandising companies interested in promotional buttons and advertising buttons. Record labels, as well, seem to be placing larger orders for band buttons. Campaign buttons are also extremely popular this time of year.

To confirm this theory, we were talking with our parts supplier, and they have also experienced enormous growth. What does all this mean? In a state of economic uncertainty, companies and record labels look for a cheaper, more effective way to promote or advertise. Another reason, is companies want to conserve as much as possible to stay competitive, in case of continued economic uncertainty.

Lessons to take away from this period in time. Custom Buttons are the cheapest and most effective form of advertising. Band buttons are the best selling band merch. More people are willing to pay $5 for some band buttons than $25 for a t-shirt. Even better, for bands, band button packs. Also, button packs are great tools for a promotional.